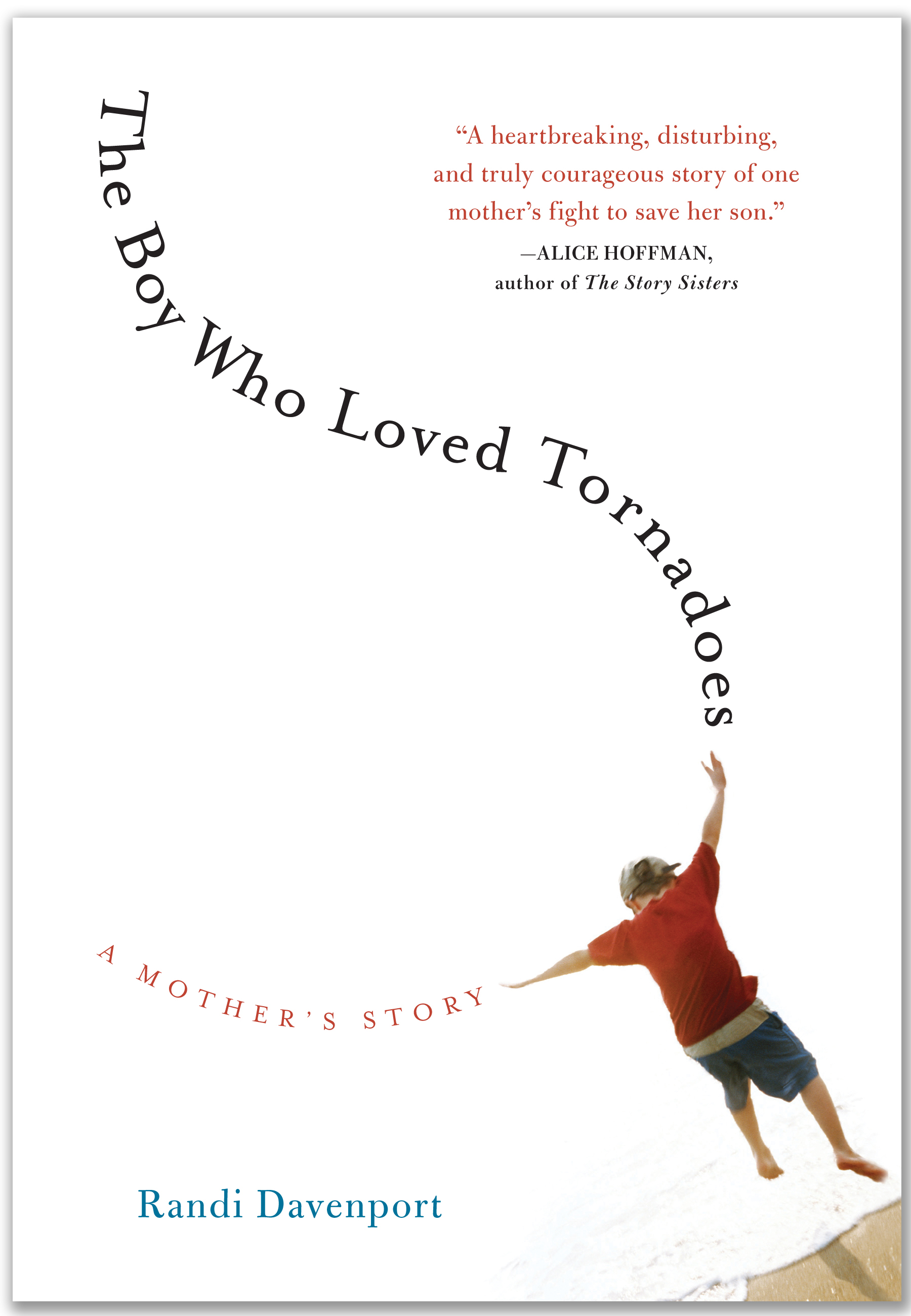 An unsentimental and unflinching portrait of love, hope, and courage.

Randi Davenport worked hard to provide her family with a sense of stability and strength. Her son, diagnosed with autism, loved music, beach trips, and the wild weather. Her daughter, often over-shadowed by her brother’s needs, loved art, music and horseback riding.

But at age 15, Davenport’s son began to exhibit symptoms of a serious psychiatric disorder. Subject to terrifying hallucinations, unwilling to eat, and unable to recognize his mother or sister, he became tortured and unreachable

Faced with the evidence of what seemed to be her son’s untreatable mental illness, Davenport realized that her vanished husband had also exhibited similar symptoms. And she knew she would do whatever it took to save her son and protect her daughter.

Beautifully written and profoundly moving, this is the story of one family’s journey with mental illness and developmental disability. In The Boy Who Loved Tornadoes, Davenport gives voice to countless Americans whose struggles to find appropriate care and hope for the future are invisible to the larger world.

“A gripping memoir of motherly love and absolute devotion.”—Kirkus Reviews

“Randi Davenport’s The Boy Who Loved Tornadoes (Algonquin) is about her son Chase’s psychotic breakdown at age 15. One doctor diagnosed him as “ ‘Chase NOS’—Chase Not Otherwise Specified. ‘He’s a population of one,’ ” as is this unforgettable memoir of a shattered family, a mother’s abiding love, and the frightening permutations of the human mind.”–Lisa Shea, Elle Magazine

“This is [Davenport’s] gripping account of that unrelenting battle. It isn’t a medical thriller that climaxes with an 11th-hour cure. The light of its happy ending burns low, but in this courageous mother’s eyes it shines as bright as the sun.”–The Boston Globe

“A heartbreaking, disturbing, and truly courageous story of one mother’s fight to save her son.” —Alice Hoffman

“A brave and beautiful story by a born writer. This is a book like a beacon, offering clarity, inspiration, and validation for us all, especially those of us, like myself, who have struggled with serious mental illness in our families…and that’s two out of five families in the United States.” —Lee Smith

“The feeling of being overwhelmed, socially hung out to dry without help, will be familiar to most American mothers, except perhaps the very wealthy.”–LA Times

“Randi Davenport has written a miraculous book about the heartbreak and devastation that occur when her son is diagnosed with severe mental illness. The Boy Who Love Tornadoes is a gripping and deeply compelling book about a mother’s search for the proper care and treatment of her psychotic son. Davenport shows us the gritty and enraging reality of our long fractured mental health system, even at the best health facilities. Davenport’s exacting and beautifully written story, along with her ferocity and unrelenting determination to help her child, make her a formidable advocate for those afflicted with these cruel and often stigmatized diseases. The Boy Who Loved Tornadoes is the best book I’ve read about mental illness since Kay Jamison’s An Unquiet Mind.” —Virginia Holman, author of Rescuing Patty Hearst: Memories From a Decade Gone Mad

“Davenport delivers a beautifully written, much-needed memoir that sheds light on the ways mental illness can reverse the orbit of a family and ultimately, how the efforts of one mother helped rebuild a life and family she thought she had lost.”–ForeWord Reviews

“From Among Millions of Ill, a First Class Memoir: Davenport’s memoir proves to be one of the best first-person accounts of the impact of mental illness on a family since Virginia Holman’s Rescuing Patty Hearst.” Ben Steele, StarNewsOnline.

“Davenport’s skills as a writer are stunning. While taking nothing away from Chase’s journey, it is Davenport’s complete command of her craft that takes readers through an unpleasant, uncomfortable tunnel of despair and adroitly leads them to the light on the other side.”–Terry Mathews, Arts Editor, Sulphur Springs News-Telegram.

“This is a story with which far too many families can probably identify.”—Booklist

“Randi Davenport’s memoir The Boy Who Loved Tornadoes unflinchingly shares her family’s experience with mental illness. Boldly told, the book skillfully portrays the effects mental illness on family members while also highlighting the inadequacies of our own mental health system, and for these reasons The Boy Who Loved Tornadoes is one of the year’s most important books.” –David Gutowski, Largehearted Boy

Listen to an interview with Randi Davenport on NPR’s The State of Things.

The Boy Who Loved Tornadoes in the News:

“A Mother’s Journey Through the World of Mental Illness”
The Pilot – Wednesday, April 21, 2010