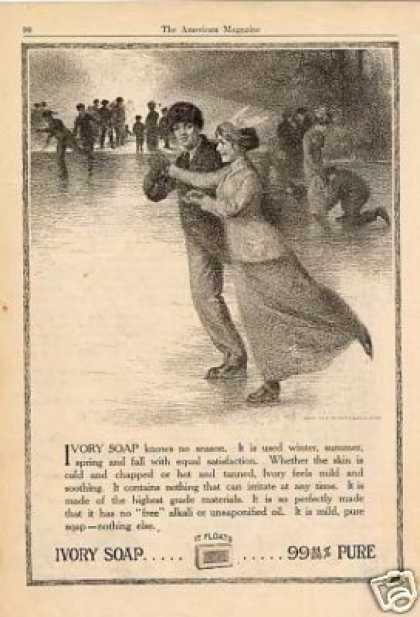 Many of the details of the physical world of The End of Always were drawn from the photographs published by Michael Lesy in Wisconsin Death Trip. These images were created between 1890 and 1910 by Black River Falls, Wisconsin photographer Charles Van Schaik. The complete collection of Van Schaik’s work may be viewed online by visiting the Wisconsin Historical Society.

Other images helped me imagine Waukesha and its residents as the first decade of the twentieth-century approached the ten year mark. These were drawn from the Waukesha Historical Society, the Historical Society of Wisconsin, and from image searches on the web, which turned up a surprising variety of views, including Menominee women, Mendota hospital, and postcards depicting street cars and buildings of note around Waukesha. Of the latter group, I use only one here; I chose not to use the others because I could not date them.

A wonderful Face Book page called “Lost Waukesha” was invaluable in providing descriptions of some of the street scenes and I thank them for their work. If you’re interested in more pictures of Waukesha, especially from later periods, I suggest visiting https://www.facebook.com/LostWaukesha.

Panoramic view of Five Points in Waukesha, ca. 1900-1909. “Looking north from Grand Avenue …Five Points is the intersection of West Main Street, West Broadway… and Grand Avenue…To the right of the alley is the Schlitz Hotel at 294 West Main Street. To the left of the alley is Brehm Brothers, a clothing store, at 342 West Main Street. Directly to the left of Brehm Brothers, is a sign for Casey’s, a saloon at 402 West Broadway. Across the street from Casey’s is Edward J. and James B. Kimball’s jewelry store at 408 West Main.”–Lost Waukesha.  [Copyright O’Brien Photo] 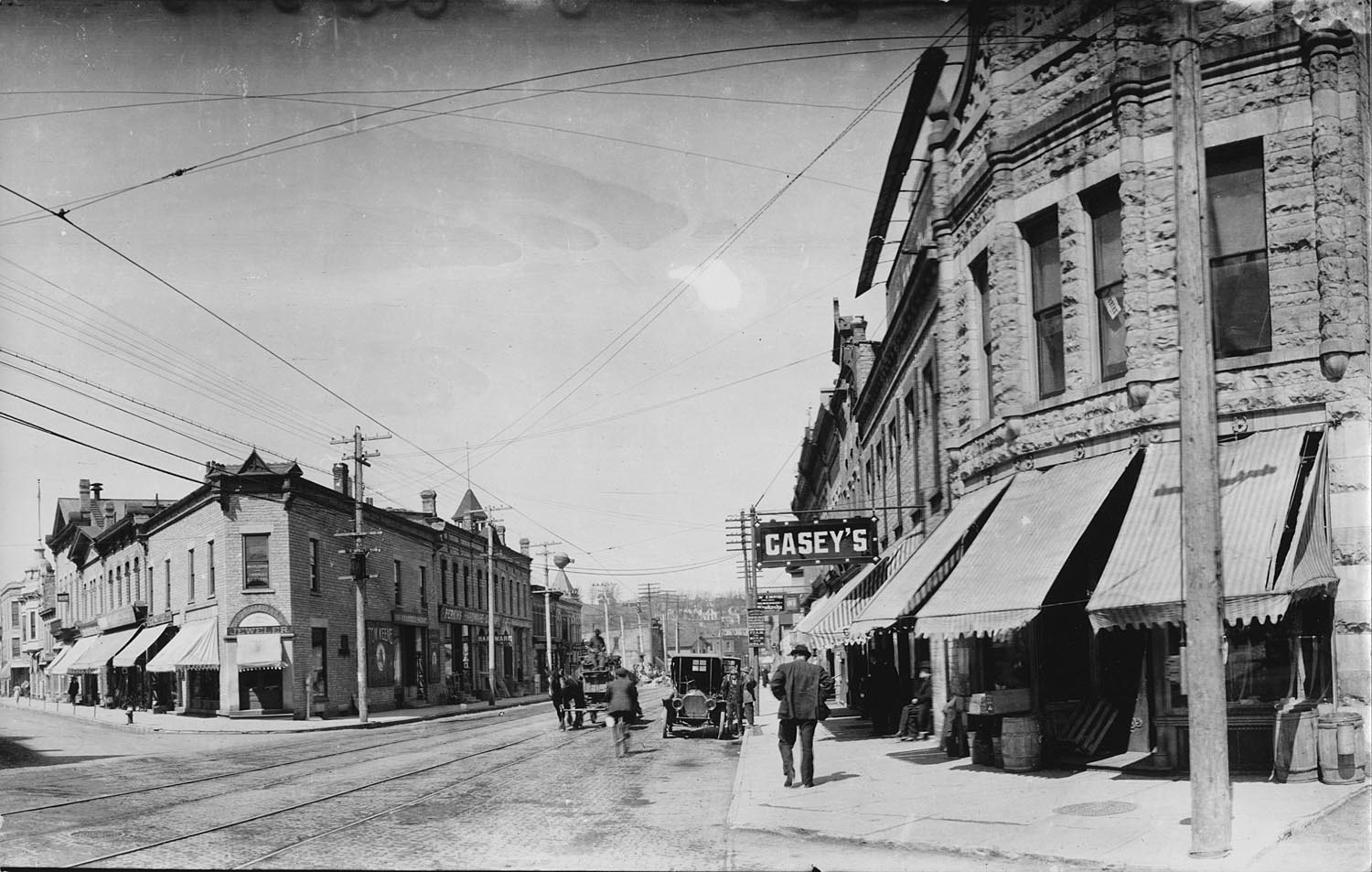 Five Points, same era, from another perspective. Note the barrels and boxes in front of the grocery, the horse and wagon, the street car tracks and overhead lines, and the early automobile. The only people on the street are men. 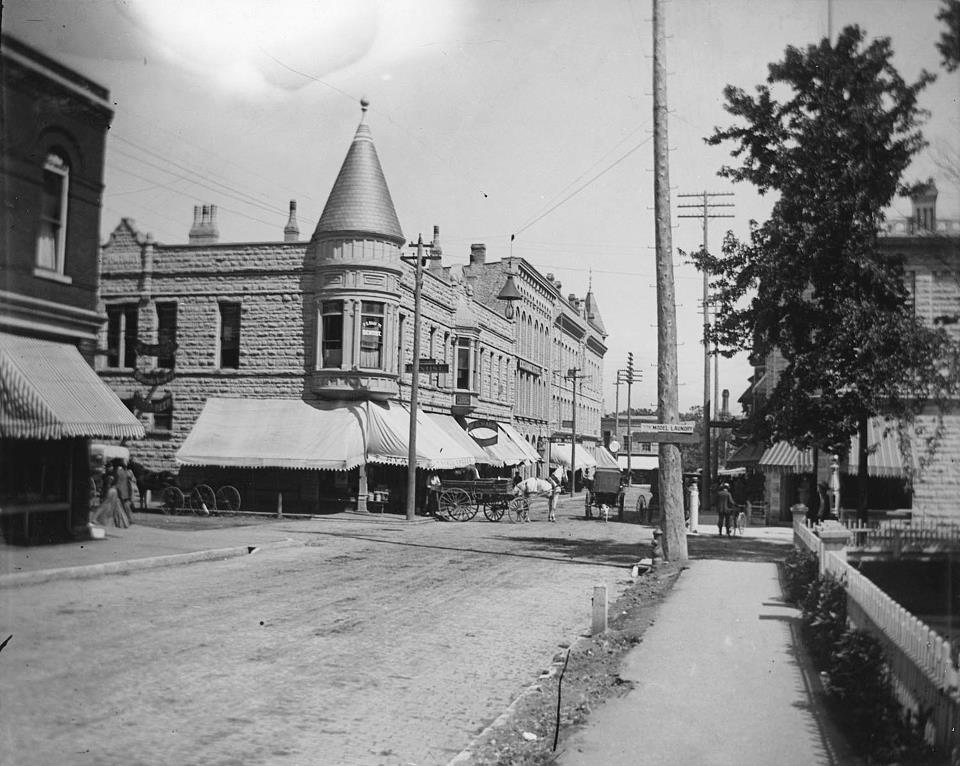 The intersection of North Grand Avenue and South Street, date unknown but clearly within the period. [O’Brien photo courtesy of Waukesha Historical Society] 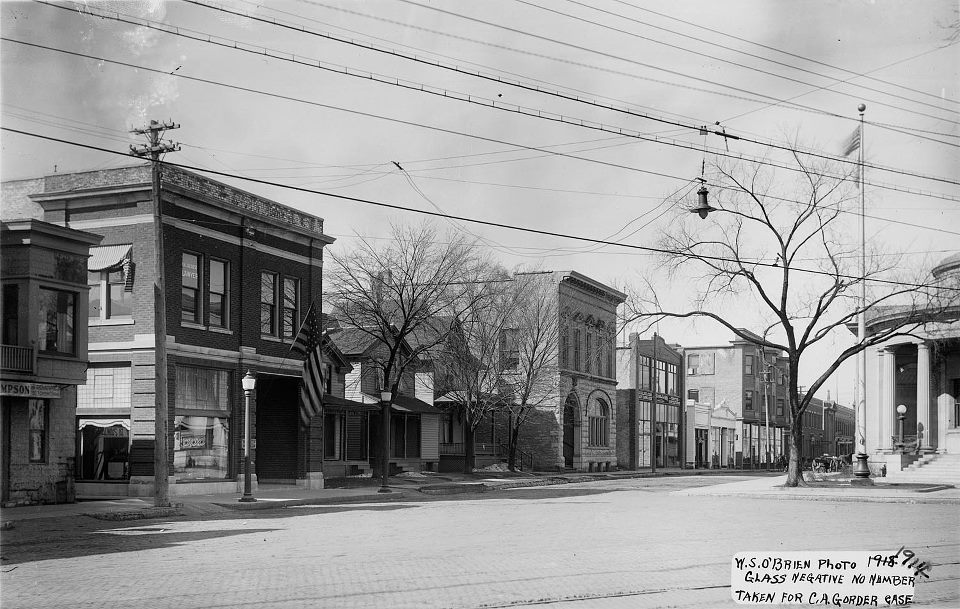 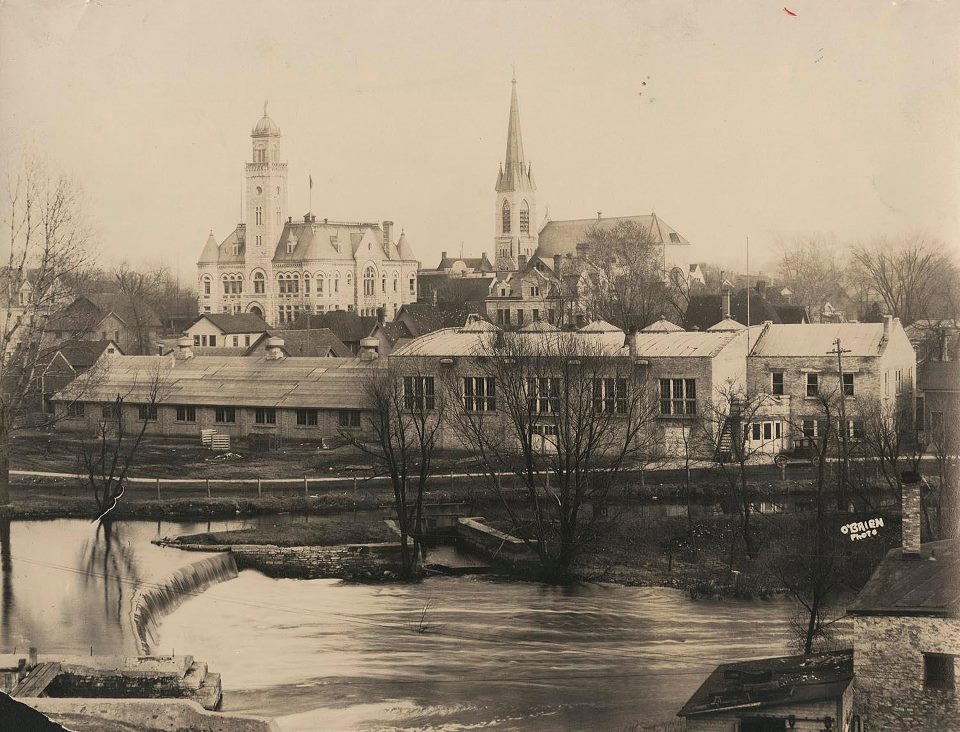 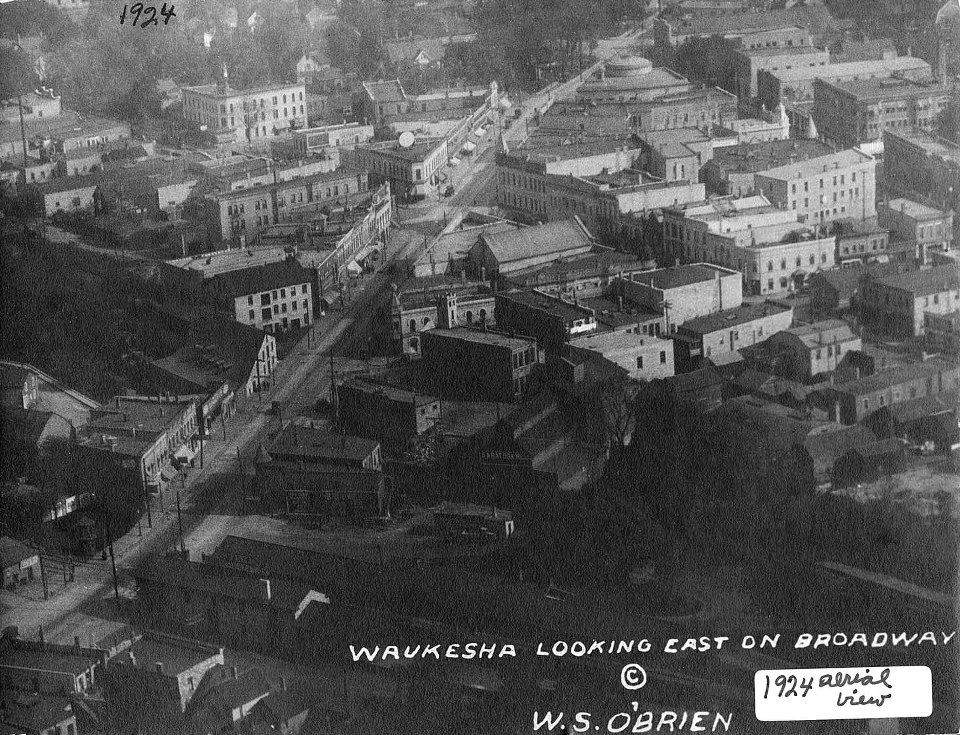 “Aerial photograph looking east on West Broadway Street in 1924. The Chicago, Milwaukee and St. Paul railroad freight and passenger depots are in the foreground. Above the depots is [the] Saratoga Mills flour mill. Five Points, the intersection of West Main Street, West Broadway…and North Grand Avenue is in the upper center of the photograph. The Waukesha Post Office… is in the upper right background.”–Lost Waukesha. [O’Brien photo courtesy of Waukesha County Historical Society] 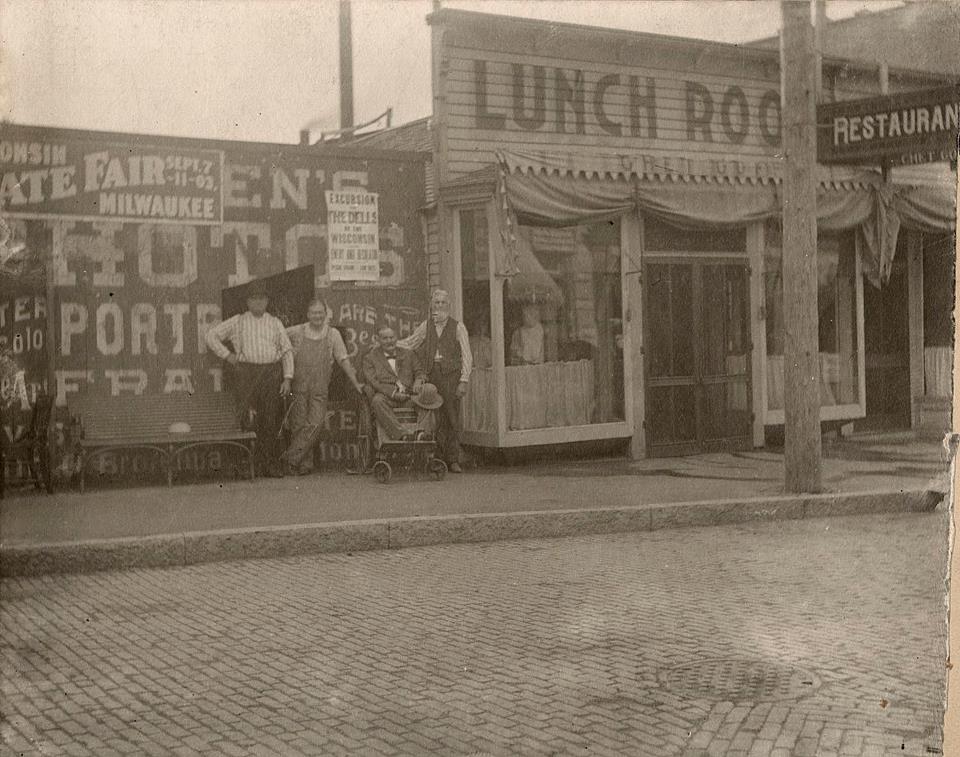 Goff’s Restaurant on Clinton Avenue,1903, “ten years after opening. In 1905 the restaurant expanded with an addition of a dining room.”–Lost Waukesha. [Photo courtesy of Waukesha Historical Society] 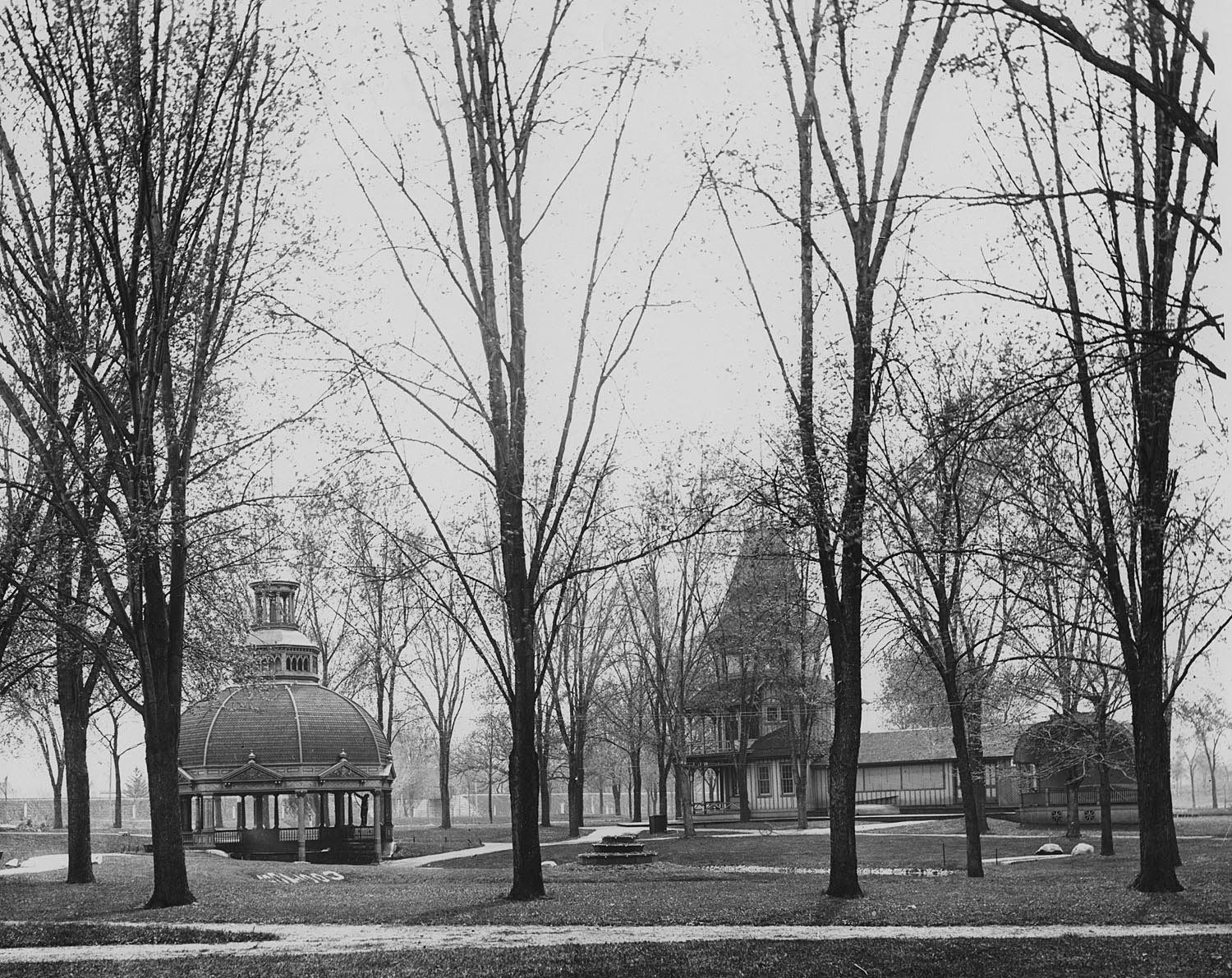 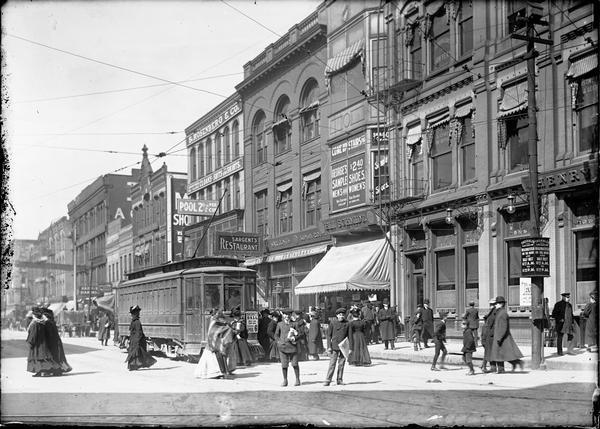 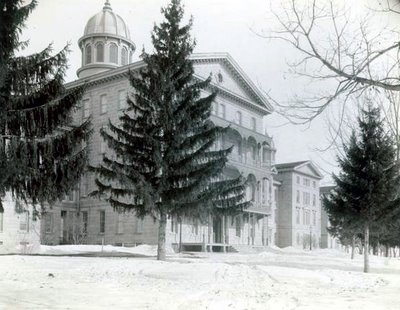 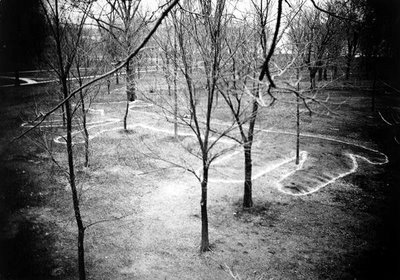 Indian mound in the shape of an animal, on the grounds of the Wisconsin State Hospital for the Insane, Mendota, Wisconsin, 1919. [Wisconsin Historical Society] 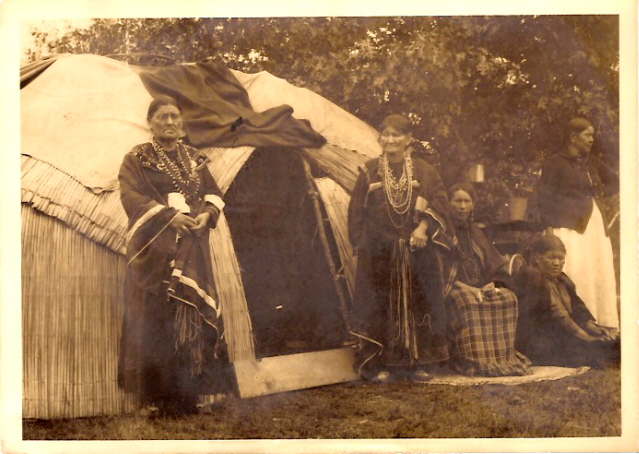 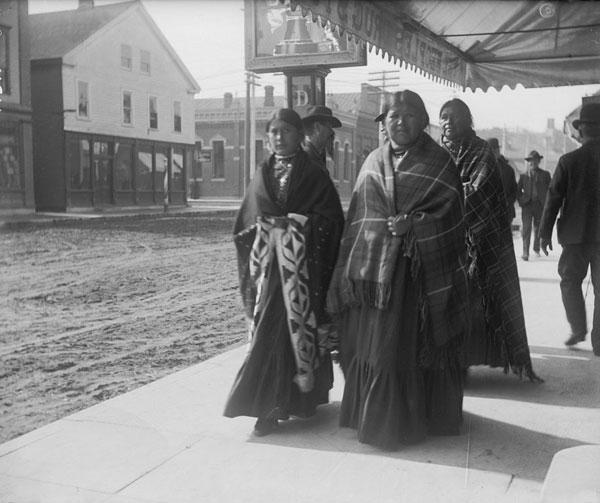 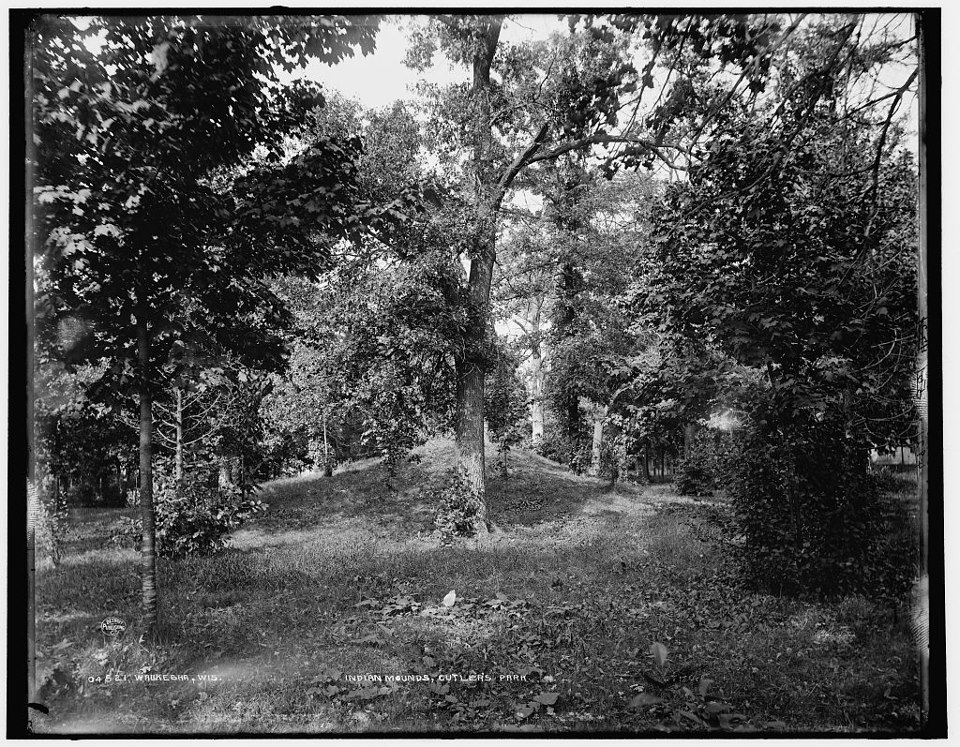 Indian mound, Cutler Park, Waukesha, date unknown. “A view of an ‘Indian Mound’ in Cutler Park …from the late 1800s. 55 mounds used to exist in the city. When the mound was excavated in …researchers found decayed fragments of a human skeleton, decorative pipes and pieces of shell and pottery. The mound was not built by the Potawatomi, but rather a prehistoric Woodland tribe.”–Lost Waukesha.[Photo Credit: Library of Congress / Detroit Publishing Company] 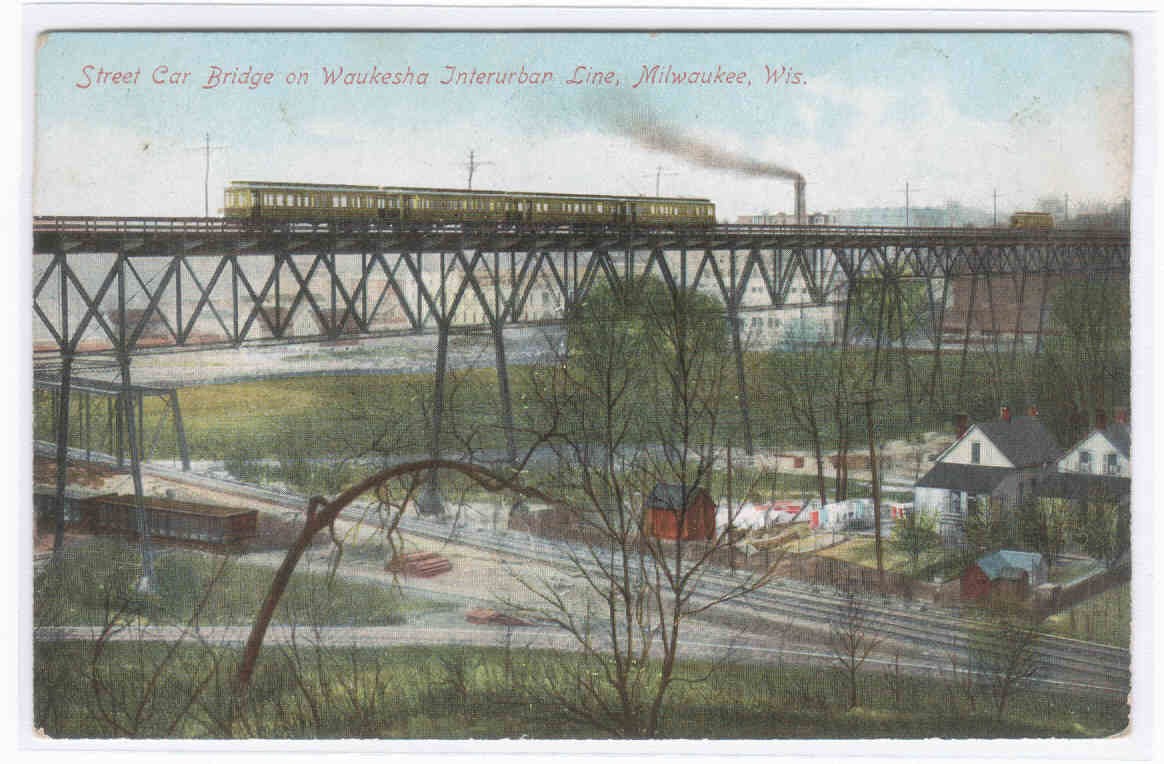 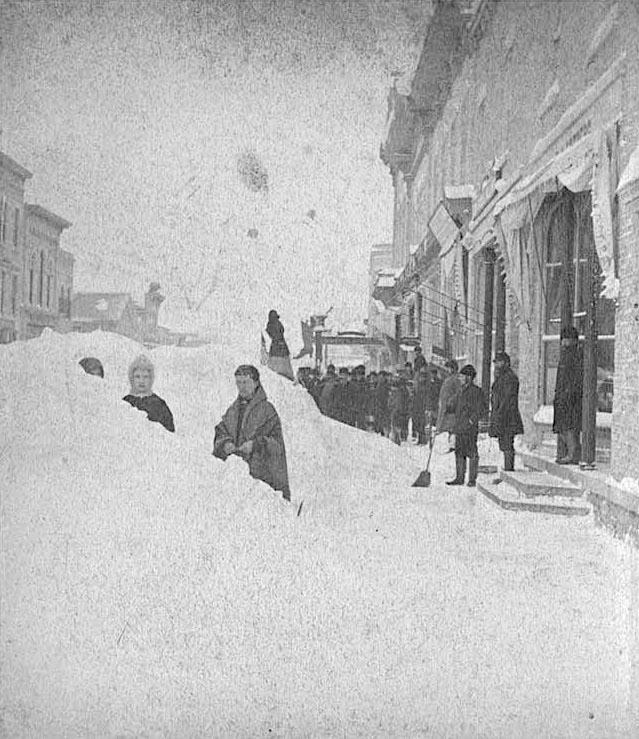